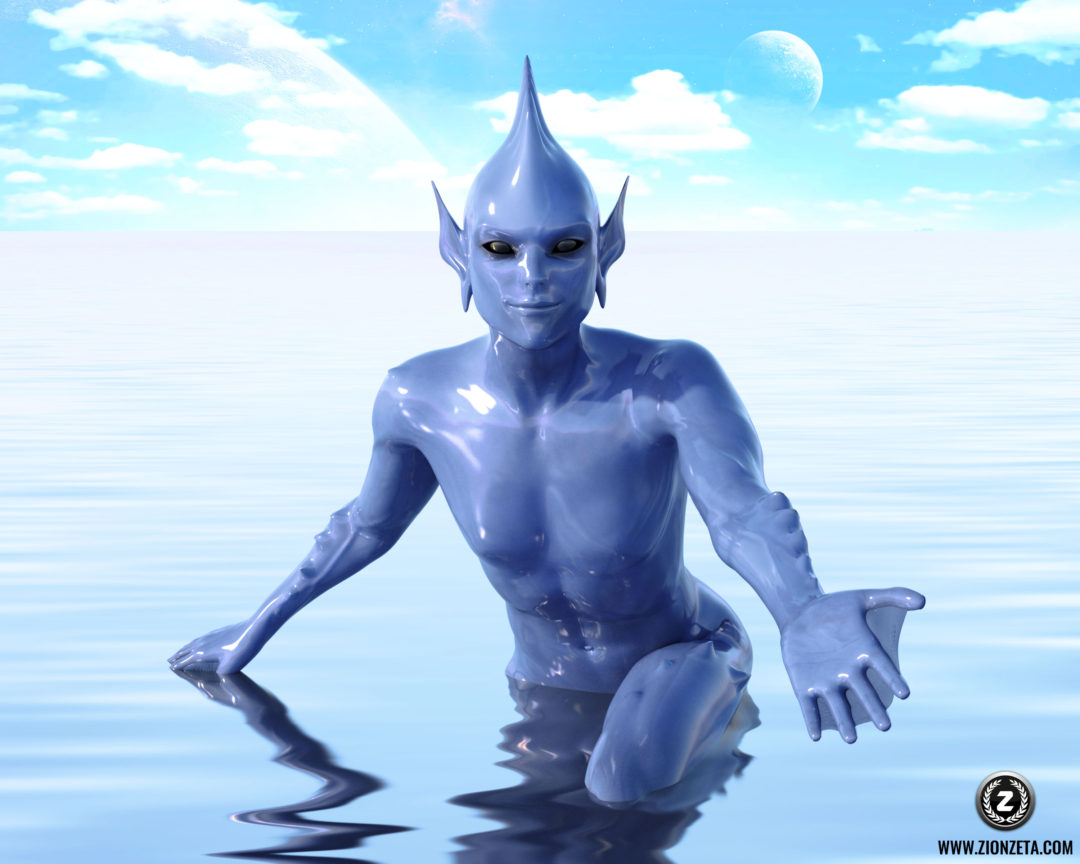 I saw a spiral, so I don’t know if spirals are significant for you. A spiral can have different meanings but in this case I feel the symbolism of the spiral is to “step into the vortex” or in other words, take the leap, make the jump. But what exactly are you jumping for? Is it to make a big move to a place with bodies of water that are closer to you? To dive into an aspect of yourself to bring out to the surface potential gifts, talents and abilities you didn’t think you had? Or to start a new career/business project? I do see you working with dolphins though, healing the waters and the sea creatures that inhabit the ocean.

After I first communicated with you, along the weekend I started to “see” in my mind’s eye a shadow figure with a strange “mohawk” and pointy ears which were very long and pointy like the wings of a bat. It was only a silhouette so I could not make out any details whatsoever. “Jessica has an aquatic guide? Nah that must be me being crazy.” I found it quite strange so I brushed it off.

When it was time to tune in to your energy, however, I was surprised to find out that INDEED you DO have an aquatic guide! Initially during the sculpting process, I knew the aquatic part but I thought I was depicting a female…which I was! But then the face started to change and become more masculine and I was shocked once again, as this has not happened to me before in any of the other portraits I’ve done for others. “But you were a woman, I feel deceived!” I thought to myself jokingly.

He is from the Nommo race from Sirius. Once I started to see his face clearly, the “mohawk” and “batty” ears made sense. I could sense him smiling at me in agreement over how I was depicting him physically, with very smooth, naturally shiny and wet skin with an athletic built. I fell in love! In my mind’s eye, I could see the environment around him becoming clear, only to reveal the serene ocean with a bright sky with different turquoise and baby blue hues merging together, with clouds semi-hiding a pair of planets.

I noticed he did not have a “mer-tail” but instead he had legs and was sort of on one knee with the other leg bent as if he was slightly stepping out of the water. He extended his left hand to me with a small but warm smile, as if inviting me to join him in the water.

This is a message for you to be bold and be brave, to immerse yourself in your emotions, it is part of the human experience and there’s nothing wrong if our inner ocean is in turmoil, it is how we cleanse and re-construct a new version of ourselves so destruction and chaos are necessary. We are constantly changing and morphing like the waves of the sea that take form only to then crash, they may repeat themselves over and over but they are never alike. Also, to “dive deep” into what is hidden within yourself, there are a lot of treasure chests (pun intended, from him!) hidden within your inner ocean waiting to be discovered and opened. What are you afraid of? That could be your purpose. It is time to face that fear, but you are not alone, as he is by your side, so there is no need to fear of “drowning” because he will assist you. He is your protector, in fact I would dare to say he must have been some kind of past-life lover of yours in one or several of your reincarnations over Sirius, because the way that he gazed into my eyes felt like the loving gaze of a romantic partner when they desire to hold you in their arms, so I feel he was directing this type of gaze to you through me so that I can transmit what he’s feeling and thinking, which shows in his gaze and physical actions, no need for him to use words.

The sky symbolizes an event or situation clearing up for you after remaining stagnant for some time or that was confusing and unclear for you, and since I link the sky with the air element, this could be a thought or an idea that you weren’t clear as to whether to pursue it or not, alternatively a pending communication or conversation to clarify something, and the diminishing of nightmares. The serene water symbolizes your emotions, which may be running high at the moment, but he is there to help you still your mind and heart, so you can open up to his energy to better communicate and interact with him directly.

He likes to call you Jessie in an endearing way. To some people, they don’t like their names shortened for whatever reason (I’ve had people lash out at me for shortening their names), I feel he says and does things in a teasing way for that reason, to embarrass others, to annoy them and make them “cringe” (my favorite word to use), because he enjoys to have a good time and feels that we as humans most times are way too serious even with ourselves and we don’t “loosen up”. So I feel he’s telling you to take some time to be playful, to have fun and laugh as a way to decompress from the sometimes harsh days we have. Make it into a routine just like brushing your teeth or taking a shower.

You may call him Orlo, I was struggling with how to appropriately refer to him without a name, so he came up with Orlo. I had the feeling to look it up so I did and it actually exists, it is a real name that means “Bringer of Light” so this explains why the environment he is in is quite bright, besides his gorgeous shiny skin that reflects the rays of the sun back at you, just his energy alone can light up a whole house, not just a room!

Due to his watery nature and high frequency, his interactions with you may mostly consist of astral interactions or during meditation, because he cannot materialize in this physical plane, but you have the ability to travel out of your body with your consciousness, it is easier and safer for both so if you can’t remember your dreams or astral journeys, make sure you sleep with an Amethyst quartz to help give you a boost to push you out of your body if you’re having struggles astral projecting, and Lapis Lazuli to help you with communication with the higher realms. He has much to teach you when it comes to healing through your hands and vocal toning (light language), and I see a white large singing bowl, I think those are called crystal singing bowls, so sound healing is probable.

Thank you for allowing me to share this beautiful portrait.