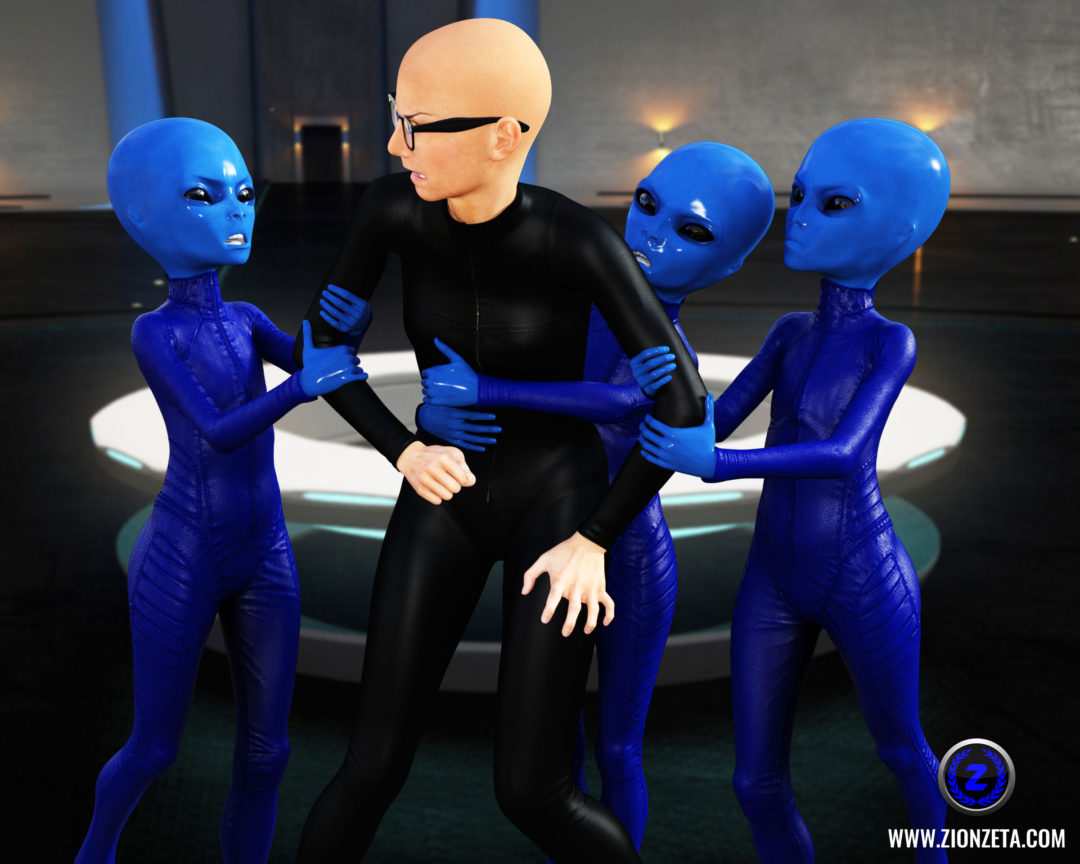 TL;DR: Weird dream and it’s fucking long so, yeah.
TL;DR2: Even though there are no differences, there is a leader involved in this illustration, which is the blue being in the middle, grabbing me from behind.

I was in a large bathroom with several ladies. They were all tall, fair skinned and had long black straight hair, some of them had bangs and others didn’t. They were all taking a bath in a large oval shaped tub and I was becoming desperate with them as they were complaining about different things,

“My hair is knotty!”
“Where’s my thong?”
“The water is so warm and cozy, I don’t wanna get out!”
“My hair is silky smooth!”
“Where did I put my clothes?”
“Ahhh! I’ll wait for you ladies outside!” I walked away from the large bathroom across a very wide and long hallway, with white walls and ceiling, and a dark carpet with a weird pattern of swirls in strong colors and small diamond shapes.

A lady was walking towards me, she was slightly taller than I was, she wore a dark green uniform; a blazer and a knee-long skirt, with beige pantyhose and flat shoes either black or dark green. She looked in her 50s, her shoulder-length hair was medium brown/reddish, straight but frizzy, she had green eyes with heavy eyeliner and either dark blue or dark green eyeshadow, and her lips were red.

“Excuse me ma’am, do you know where’s the computer room?”
“It’s further ahead of you in the Federal room at your right.”
“Ok thanks!” I walked away and noticed that there was a lobby room at the end of the hallway. I made a right turn right before reaching the lobby and walked into the computer room.

There was a row of computers ahead of me against the white wall. At the left there was a “window” simulating a real one but it was a wall. All the computers were black, the desk was black and so were the chairs.

I sat on the second chair at the left. The computer was a black HP desktop computer, the one at my left was a black Windows tablet with a black/dark gray keyboard, I don’t remember the other ones at my right but I’m assuming they were desktop computers also as they all looked bulky.

I was looking up on Google “Worst alien abduction cases” but the computer was blocking me from accessing the search results. In that moment, someone from behind covered my mouth with their left hand and I gasped. I tried to remove their hand off of me but they injected me something in the right area of the neck, between the neck and jaw bone, and then I received another injection in the back of my neck between the base of the skull and the spine. This disabled my ability of speaking and screaming temporarily, and slightly paralyzed my body, not completely but made my body heavy and slow, as well as stiff in some areas. There were two others at my sides and they grabbed me from the arms, and all three took me away.

I noticed they were three blue beings that resembled the Zeta’s, but they were NOT Sirians despite the strong resemblance, and they were NOT shapeshifters either. Their heads were large, large black eyes and skinny bodies. If they were wearing uniforms it must have been a color close to their skin tone because it didn’t catch my attention, but I’m sure they weren’t nude. I was arguing with them and demanding them to let me go.

“Do you want us to throw you off the spacecraft?! Because we can do that!” They led me outside the craft. Then, I was grabbed from the back of my shirt and pushed forward, so I was dangling on the border of the spacecraft while barely supporting myself with my feet, which were on the edge from the border of the craft, if that makes sense. If they released me, or if I slipped from the edge, it would be the end of me.
“Come on, do it! Kill me! Bring it on!” I yelled at them. Since they couldn’t get a reaction from me, they took me back inside.

I was placed over a metal table and strapped down, and they forced me to wear a helmet. I slightly panicked as I remembered my childhood dreams. And like I expected, I was electro-shocked. I convulsed but this time I threw up almost on one of them. They removed the helmet and I sat up.

I noticed that one of them (the leader) was revising a long paper that had been folded multiple times so I approached him and grabbed it from him. It was my record.

“Greys: Has a clear understanding of the race, the hybridization program and the hybrid children, and can confidently speak about the subject.

Draconians: Has a clear understanding of the race and can confidently speak about the subject.

Geo-Engineering (Chemtrails): Has an understanding of the subject, but cannot confidently speak about the subject due to limited knowledge in the area.”

The paper was an extensive record about me and what I am knowledgeable on, from greatest to least, or maybe in no particular order, as what I could recall was located on the left side of the page at the top.

Out of the corner of my eye, I could notice that these three blue beings were looking at me, observing, while the leader seemed to be taking notes and analyzing my reactions. I could tell that he was very curious about my concern over how many sections the paper had, than the fact that I had been “abducted” or that I was about to be thrown off from the spacecraft just minutes before.

“Oh my gosh, this is a record! My record! What are they doing? What is this all about and what is it for?!” But I blacked out.