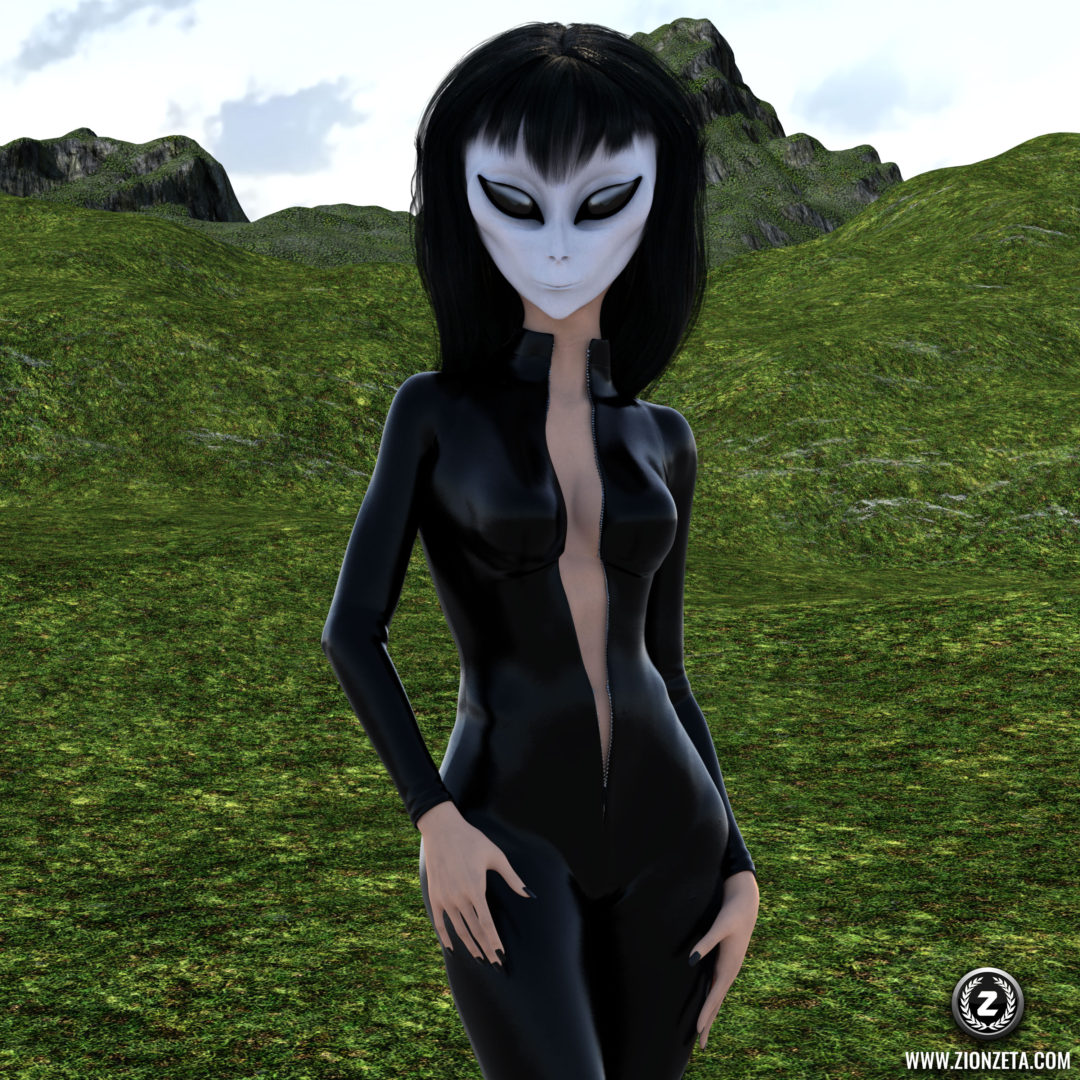 You might be familiar with Crescent, ET contact of David Huggins. He is an experiencer who is also a great artist, and he has done dozens if not hundreds of paintings illustrating all of his encounters from childhood up until adulthood. David is known for losing his virginity to an extraterrestrial woman named Crescent. Her appearance is quite unique, as her face resembles a Zeta, but her body resembles that of a human female and even the color of her skin in the rest of her body is more human.

I depicted Crescent in August of 2016 so you will recognize her most likely. I first heard about David Huggins at some point in 2015, I believe it was a friend who showed me a picture of an ET woman named Crescent, but I didn’t pay much attention to what he was saying to me at the time.

In 2016 while browsing Pinterest for images of aliens to seek inspiration to keep creating art as a way to practice my skills at the time (I was not doing commissions, I started doing art just to illustrate my experiences), I found her. Or rather, she found me.

I have no idea how it happened, but one day I came across one of David’s paintings of Crescent on Pinterest and she caught my attention, the particular painting I’m referring to is one that is easy to spot, as she’s dressed in black in a black background. It sounds crazy but I felt her energy “lock on” to me, but I kept scrolling. But the seed of curiosity was already planted so to speak. So days went by and I kept remembering her striking image whenever I was trying to fall asleep, I would see her in my mind’s eye. Things got strange when I once ordered a moldavite stone and the store owner gifted me a crescent moon pendant to wear and I flipped out.

During these blunt synchronicities and her image coming to mind shortly before falling asleep, it was through Crescent that I came to the realization that I am bisexual but was always in denial ever since I started to question myself when I was 12. Crescent, out of nowhere, someone else’s contact, brought that up to my attention, effortlessly, for me to confront and acknowledge once and for all, through sexual images involving me and, either her or another ET woman similar to her. I have a couple of renders I’ve done but they are NSFW and are private. So Crescent has a very special place in my heart for helping me to come to terms with something that was haunting me since my early teens but never really talked about it with anyone else.

David Huggins and Crescent are a pair of rare gems, it was difficult to find more information on David and his experiences. The urge of knowing more about him and his connection to Crescent and gobbling up the information that I could find were some of the things that led me to making my own impression of her back in 2016.

To my surprise, several weeks ago I found out through a synchronicity that David Huggins was going to have his own documentary where he was going to share his story, his encounters and paintings, and how it all began. You have no idea how fucking excited I got when I found the Facebook page, Love and Saucers, which is the title of the documentary.

Today on 12/12, the “Love and Saucers” documentary was released, so in honor of their release, I decided to give you an updated version on Crescent while also taking the advantage to share her once more as my little celebration for the release of the documentary. And it was fucking great, alright? LOL.

I enjoyed the focus on David Huggins right off the bat. The documentary had a nice build up that made me feel teased in the beginning. The intimacy and closeness made me feel like I was right there with him in his home, sitting with a glass (of juice for me) and listening to him speak and share his experiences right from the start, during his childhood when it all started. It was very visual, so as David speaks you will see his own paintings when he’s talking about his encounters and interactions. It does contain paintings that are NSFW, in case you watch it with your children. I highly enjoyed the balance between speech and visuals, it keeps one focused and engaged. There were other people close to him who were also featured and they give their own impressions and opinions in regards to David and his encounters.

I am a sucker for the more technical stuff, like the coloring of the shots in the documentary, the way certain scenes were filmed, the graphic effects that makes certain parts of the paintings “pop out” of the canvas literally so they look like a semi-realistic scene shot, the music composition, David’s charming personality and at times witty and funny sense of humor with the people behind the camera, overall it was a great documentary and it exceeded my expectations. All of the people involved in the documentary did an excellent work of art and I love how they were able to tell David’s story not just through his words alone but through their own magic that they each added to the documentary as well.

If you happen to be an experiencer who has an alien lover like David Huggins and myself or you simply enjoy listening to the otherworldly bizarre stories of other people, this is the documentary for you. It is the only documentary that I would watch again and again and I highly recommend that you give it a watch!