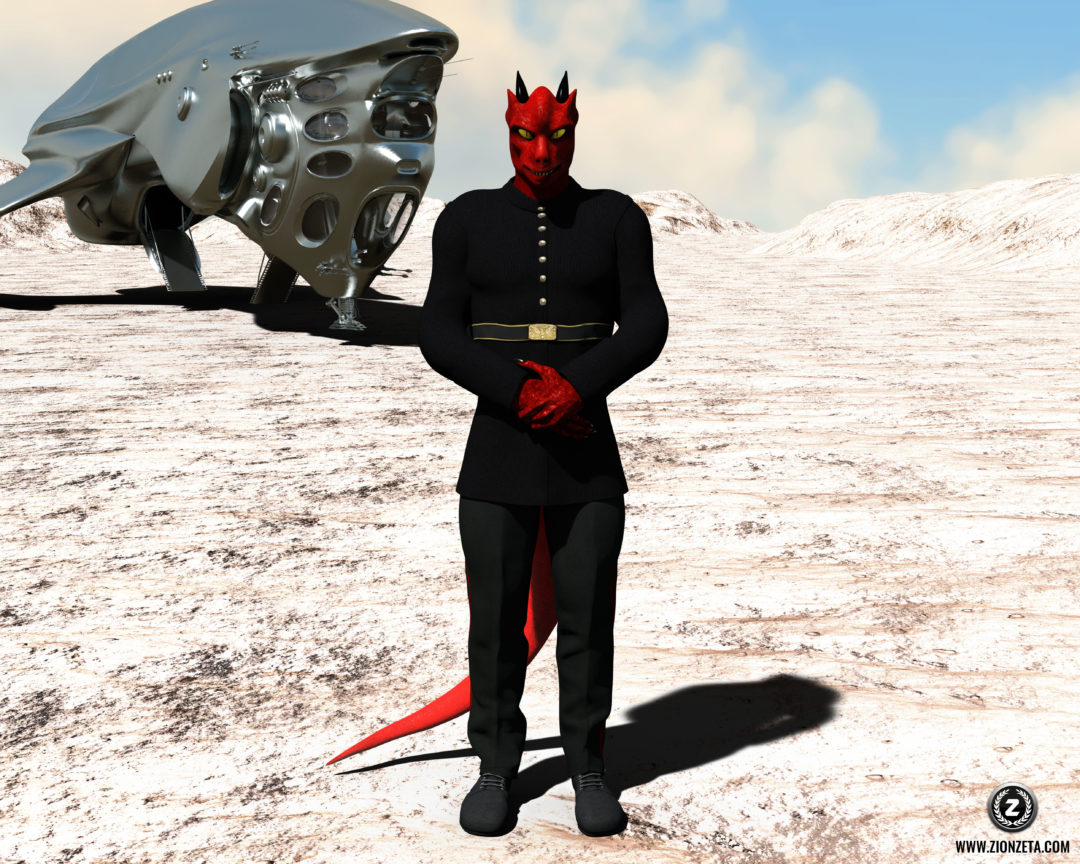 Here is Quetzl once again, in a different environment that he personally suggested and he guided me to create and show his spacecraft as well.

This second depiction carries a message of independence and radical self-reliance, learning to do things on your own, by yourself, not relying on others all the time, learning to be comfortable with your own company and not feel weirded out for enjoying solitude, this is how many of us recharge.

As I see Quetzl in the desert, it reminds me of the soldiers who get deployed to faraway deserted lands. He asked me to give him that environment and show off his spacecraft as well. I feel he enjoys the burning sun and the blinding white sand (which I toned down in the portrait). It makes me feel suffocated to see him wearing such a thick uniform under the blazing sun, as I can feel and see myself in my own uniform from my own star family, to which he charmingly adds “Get naked then, human.” and I couldn’t help but giggle, because with that he reminded me of my own uniform’s capability of adjusting my body temperature depending on the temperature in my environment, which his own uniform has the capability to do as well.

I sense Quetzl ditched the group and followed his own way, so you can see him here exploring other lands, places, planets, as if he was looking for something. When I ask I don’t get a response, only “Mind your business.” lol but he’s being playful…although, you really can’t tell, with that menacing attitude all over his face. He is an observer, an explorer, and I would say he’s some kind of supervisor, but I don’t see him giving orders to anyone, perhaps because he no longer gets involved in groups and limits himself to interact only with those who are of a similar rank to him or even higher.

I initially thought he was one of your galactic aspects, but he feels too “external” to me from you, and much, much older…and he feels insulted now lol, I should say, wiser or as he puts it “Higher in rank.” so, he can be quite arrogant…or come across that way when he doesn’t mean to as he’s stating to me that “It’s just a fact, not arrogance.” well shit! He’s enjoying to correct me and my impressions of him LOL! I’ve never had this happen before haha! He’s a true gem, he feels like an older protective brother to me who is wise beyond his years, I would dare to say 10 years older than you, in his early 30s if I were to compare him to Earth years, except he’s several thousand years old or so.

He was the one who told me during our interaction to tell you to use Amethyst quartz for dream-recall, astral projection, lucid dreaming and for opening the third eye as well. You can either wear it as a pendant, a bracelet, in your pocket, or just keep it under your pillow or next to you in a night table. I feel he’s bringing it up again as a reminder for you (and me lol!) to work more with the purple/violet energy.