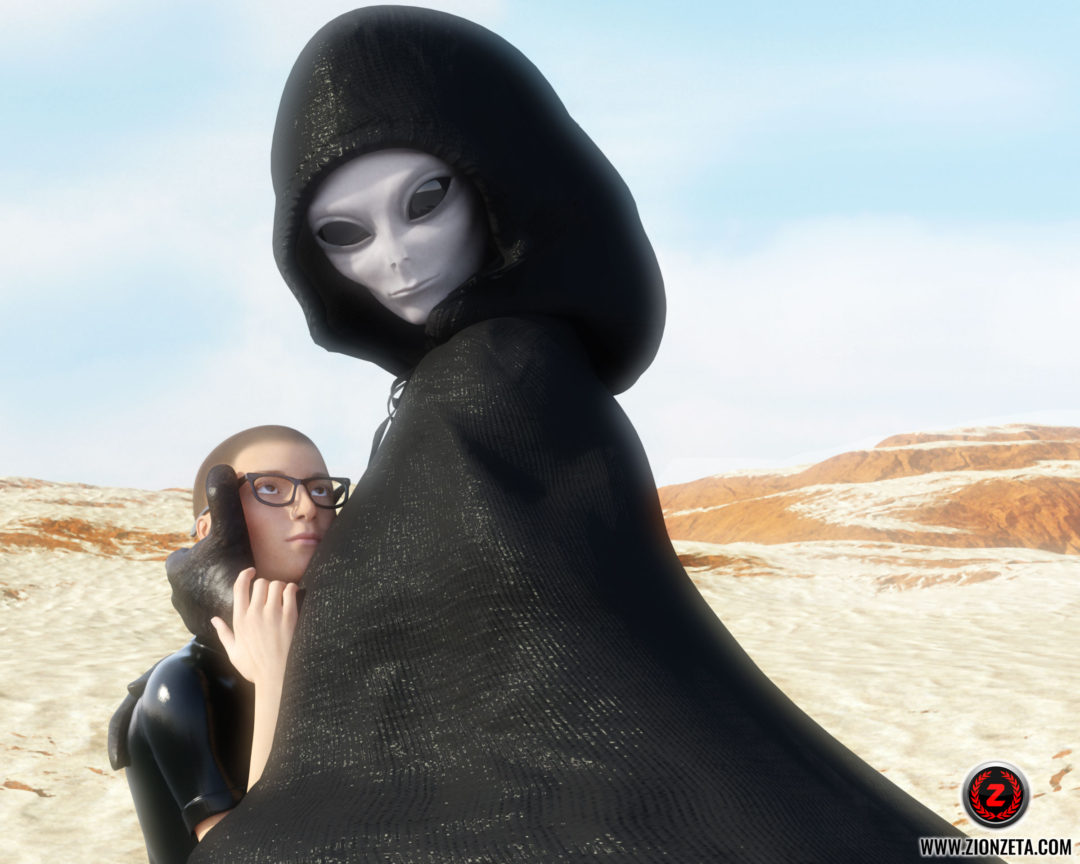 Captain Phantom. He is around 7 ft. tall while I am 5’7″ ft. tall. I met him back in September of 2016, unfortunately I have no idea where the astral log is to share the experience, so I’ll share what I can remember.

PS: This illustration’s background is different on purpose for personal reasons that involve them.

I was taken to a Zeta spacecraft, there were several Zeta Greys wearing black uniforms, and they wanted to give me the experience of floating above the Earth’s atmosphere, since they know I wanted to be an astronaut. I was led through several hallways, the majority were dimly lit and dark grey, until we reached the end which was a squared room that was dimly lit by neon blue lights and wide windows on the sides.

“Ready for ejection.”
“Uh oh.” The sliding doors ahead of me opened up and I was sucked out of the craft. I began to float over space. I was calmly turning and spinning in all directions, until I saw the black cord that was attached to my belt and held on to it to gain balance.

I looked to my side and saw the planet. It was breathtaking. So much silence was extremely soothing for my crowded mind. My thoughts eventually faded away as I gazed at Earth. But then I realized where I was and I panicked.

Eventually one of the Greys came out of the spacecraft on his own to take me back. But instead he cut the cord and pushed me towards Earth. I screamed and flailed while spinning in all directions while heading towards Earth and blacked out. Next thing I know, I am still screaming until I realized I was back in the ship in the same blue room and a Zeta Grey was grabbing my left forearm to snap me out of it.

“It was all just a mind test? How dare you!” I pushed him away while the remaining five Zeta Greys looked at me as I stormed out of the room.

But as soon as I walked out the door I bumped into (and was surprised by) their leader in the dimly lit hallway. Approximately a 7 ft. tall Zeta Grey male wearing a long hooded black robe with a black full-body suit and black gloves. He gently pushed me back with his body.

“Are you gonna let me out?” He kept pushing me back with his body, so I slowly stepped back as I looked up at him.
“No? I guess not.” I muttered in shyness as I looked away from him.
“Zion, I wanted to personally congratulate you for your outstanding job on Earth.”
“Wait are you the boss around here?” I looked up at him as he extended his hand and we shook hands.
“Yes.” He patted my left shoulder and I blushed as the rest seemed to clap and cheer.

But then they left the room, and he invited me over to his room, where he separately monitored everything without having to be involved with the rest of the crew unless necessary. We remained silent for several minutes, just observing each other. He allowed me to look around the room and touch the controls or sit in his chair if I wanted, I’d spot him glancing at me once in a while, but when I knew he was directly looking at me, that’s when my eyes would return to his, so I would turn around to look up at him with a warm smile.

I eventually approached him and stood right in front of him, very, very close to him and gazed deeply into his large black eyes. He stepped forward and I gave a step back, only to end up pinned against the back of his chair with him standing in front of me, placing his hands on the top part of the chair behind me.

He did not intimidate me despite his height and his intimidating, stern gaze. In fact, the longer I made eye contact with him, the more loved and protected I felt. It felt like reuniting with an old lover that I deeply cherished and loved unconditionally with all of my heart in a previous lifetime. Who knows.

“And how may I call you, handsome?” I smiled playfully and a small grin was slightly evident in his face.
“You can call me Captain Phantom.”