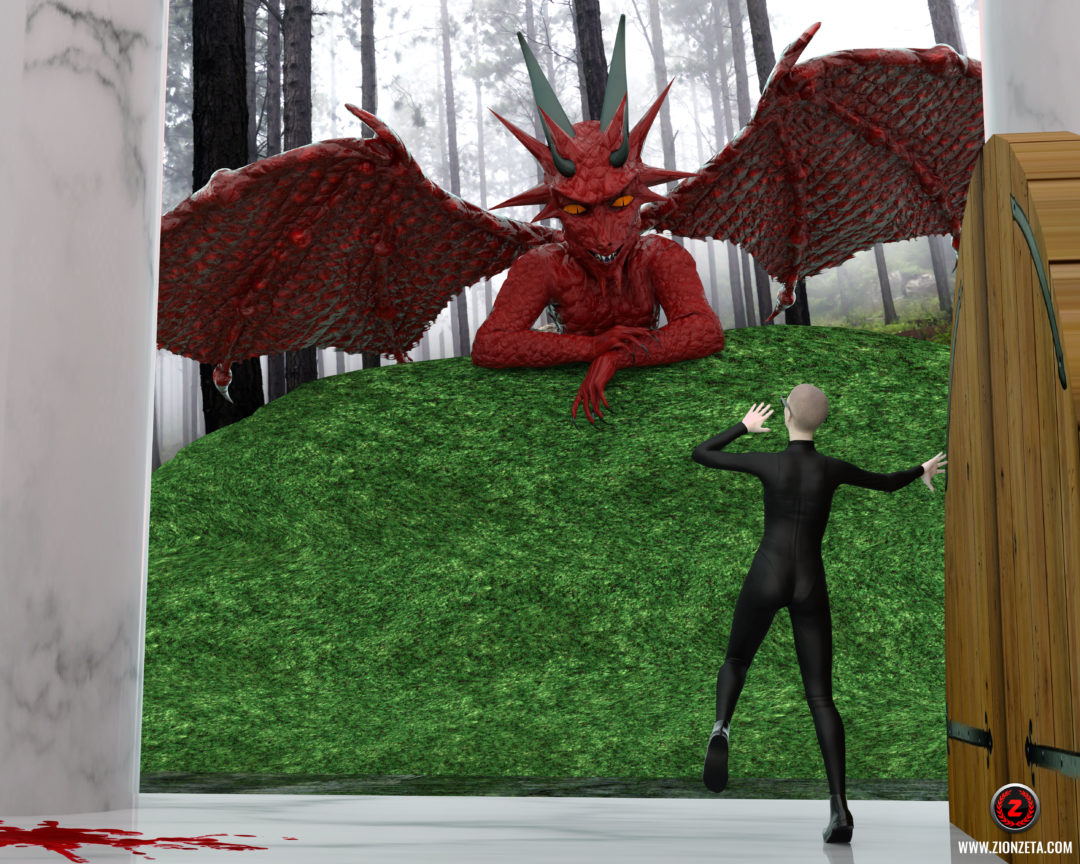 Nathan initially received a posed portrait of his red dragon guide. I did this for the sole purpose of having a clear image of him for the two of us.

However, how I met his red dragon was quite interesting, as I had an astral experience in some sort of temple where I encountered him.

This is the actual portrait I would say Nathan ordered, as this was literally a scene from the astral encounter I had when I meditated with his energy and intentions to see who wanted to come forth. When I shared the astral encounter with Nathan, he asked me if it was ok if I could add myself into the portrait even if he had to pay an additional fee, rather than a “first view angle” so I agreed to it.

There is also a second version to this scene, which is only the temple itself from a more frontal view, and will be shared later this upcoming weekend.

I am not allowed to share the meditation notes, except my astral encounter.

I landed on the grass and walked towards a structure made of marble pillars and stones making some sort of pathway in middle of the grass, trees and hills. As I was approaching a door that was hiding under a hill, similar to a hobbit house, I heard a huge slam behind me that made the ground shake causing me to lose balance and hold on to one of the pillars.

When I looked back, I saw a very large reptilian male of mixed dark green and lighter green skin, very scaly and reflective texture, with light green eyes and slit pupils who was furiously destroying the path I had just walked on and was heading towards me to smash me along with the door that I was trying to get into. I screamed to the top of my lungs when suddenly at my right side a red dragon came through over the hill to stop and destroy him from causing harm. The red dragon eventually bit him whole from the neck and he was done.

I walked forth to step away from the pillars to see him. The red dragon rested his chin over his hands on top of the hill at my right. The red dragon had orange eyes with slit pupils, but he was very friendly despite being so serious. I looked up at the red dragon and approached him. He blinked and gazed at me with a small smile.

“Thank you.” He slightly tilted his head and continued to look at me.
“Oh, he does not understand me. He does not speak my tongue.” He blinked, then an idea popped into my head.
“Domo arigato!” I thanked him in Japanese and bowed, and the red dragon smiled. It is unclear if he understood me or if he received the impression behind my words and actions. After this, I woke up.

I am thankful to you Nathaniel for allowing me to share all three portraits I have lovingly and proudly done for you, I am happy to know you are satisfied with my work and that my experience as well as the portraits have all confirmed everything you have inquired about. Your support is deeply appreciated and never taken for granted.