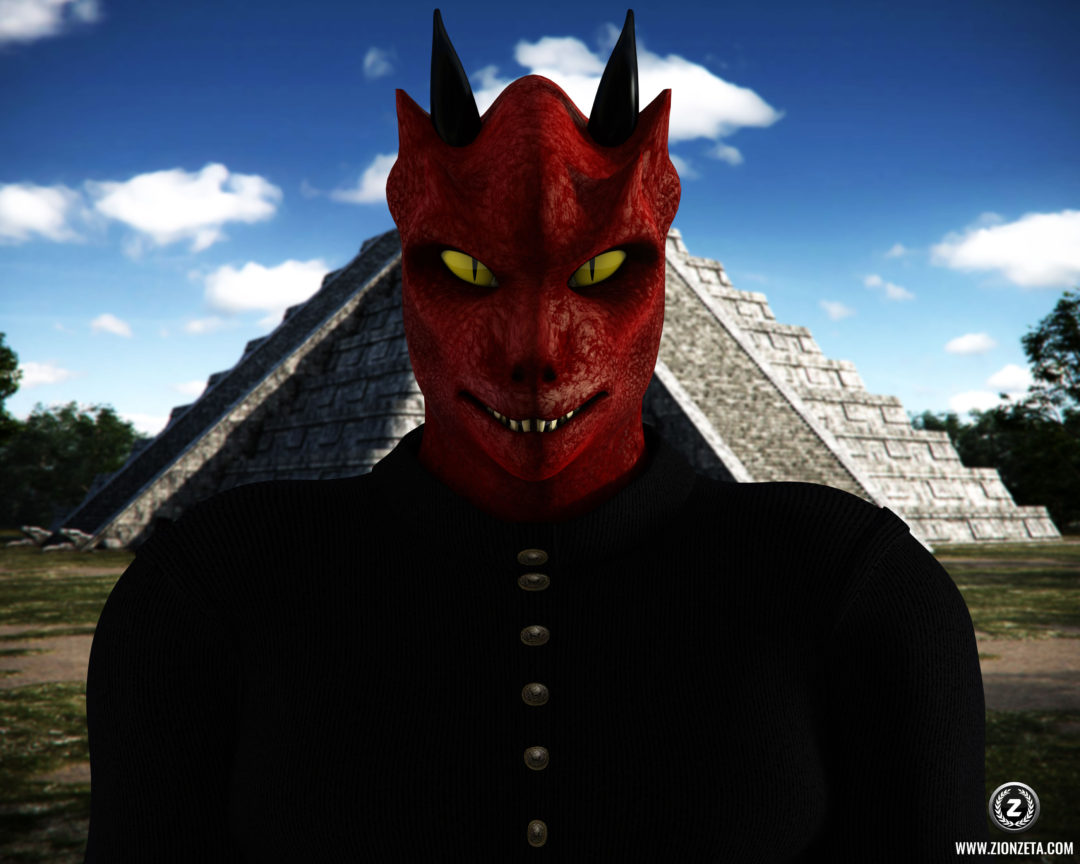 ANUNNAKI. This was the first thing that came to mind as I gazed into his eyes.

Quetzl…he is a Saurian! I knew I recognized this persistent, strong and ancient energy from somewhere! But he does not look like a typical Saurian. Saurians are a race of reptilians that highly resemble dinosaurs, but in a more humanoid and bipedal form. But he’s red…and with horns and spikes on his head! Among some Draconians, Reptilians and other groups within the races that are lizard-like, horns at times are a symbol of royalty, but it is not always the case, as there are royal Dracos, Reptilians, Saurians etc. without horns.

I am seeing myself from within the eyes of a Mayan priestess, as if I was a ghost in her body (like a medium channeling a ghost during trance), but then again she could be an old aspect of myself from a past life, because I know I no longer belong to that body, for it has vanished centuries ago in a fire. I am having chills as I close my eyes, as I can immediately transport myself to a circle made of flat rocks and a bonfire in the center of it. I am dancing and speaking in tongues, there are others surrounding me outside the circle, including non-humans…they’re reptilians. But there’s a particular one that is different from the rest of them, he seems to be their leader, and I am dancing for him. It is Quetzl. I can feel I am wearing a crown of feathers as I can perceive the light touch of the feathers whenever I raise my arms in praise.

“Those who from the Heavens arrived.”

He is greatly pleased over our ceremony. Quetzl is the leader of a small group within the Anunnaki group which is very large and consists of various galactic races from Orion, Pleiades, Lyra and so on. They have come to give us knowledge, skills and the understanding of that knowledge and skills, as well as tools for our advancement, but there is a small group (of different races) within the large group who have come to seed the women to continue their bloodline, to make a powerful hybrid race that can be “hospitable” for them and other galactic races to reincarnate into by bridging it with a young race, others have come to take our resources as well. I don’t know what resources, but I see minerals, gold and rubies, sapphires and other gems. Back then it was our resources, but for some reason I feel “stuck” in there in the past, as I am speaking of it as if it was happening in current time.

There are disagreements among them as a whole as to why they are here/there and what they will give and take, as like I mentioned, there are other races involved as well, and not all of them, even from within the same Saurian group (and other groups of other races) want to breed and share their bloodline, others don’t want to give knowledge, while others want to help the young race to evolve by giving them understanding of the knowledge they have to share. They are being polite with us natives but I can sense the tension among them due to the conflicts of their disagreements with each other.

This is a message from Quetzl, that you have to watch out for your own interests, and that if you feel there is something wrong among a group, or something you don’t like in a group, or their interests no longer suit yours, that you should back off and step out to follow your own path. That’s where the second portrait comes in with Quetzl in the desert. He deserted the others and became his own leader.

To some he will look like he’s smiling devilishly, while to others he will look like he’s slowly opening his mouth to devour them. He’s naturally a shapeshifter both physically and emotionally, so with him you just never know what’s going to happen. Calculative and analytical but also impulsive. Quiet but his gaze can say a lot. Doesn’t show his emotions whatsoever (lord forbid!) but I know, I know he has them, it’s all in the eyes…and how he’s looking at me xD.

I don’t know why Quetzl is hinting at having links with me. I assume this is the name of the race as I believe I heard in your session that they don’t have names individually.

I hope you enjoy him as much as I did when I was creating his beautiful image. 😍 This is definitely one of those images that I will admire, over and over again xD